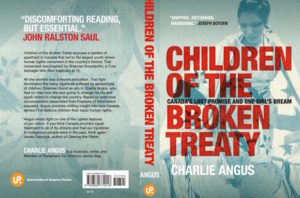 Author Charlie Angus—New Democrat Member of Parliament for Timmins-James Bay—draws a line from early 20th century, grossly-low education transfer payments for Aboriginal students in residential schools to a shortfall of $1.54 billion in First Nations education dollars between 1996 and 2008.

Today, 89 First Nations across Canada have drinking water advisories, 43 of them in Ontario. As with education, provision of clean water suffers from a lack of jurisdictional coherence. The Ontario Clean Water Act of 2000, a response to the deaths in Walkerton, Ont., does not cover reserves in the province.

Daily we hear of child and youth suicide: 100 attempts in Attawapiskat (population 2,000) since September 2015—38 of those in March and April of this year. Yet, Angus chooses to focus the book on the vision and courage of Aboriginal youth who struggle for equity, fairness and respect.

In January 2008, a Students Helping Students campaign was launched to stand up to Canada’s “educational apartheid.” Attawapiskat’s need for a school was dire.

Within a few weeks, national media picked up the story, and two northern Ontario schools joined the campaign, followed by schools in Toronto. A YouTube video (a new platform in 2008) made by David Fraser, an Indigenous Grade 5 student, went viral with 35,000 hits. Teachers’ federations and school boards across Canada wrote letters to then Minister of Indian Affairs, Chuck Strahl.