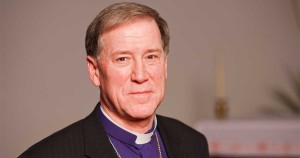 from The Most Reverend Fred Hiltz, Primate, Anglican Church of Canada

I greet you in his name and love on this The Feast of the Epiphany. Today we remember the visit of the magi, their adoration of the Christ Child, and the offering of their gifts – gold, frankincense and myrrh. …

The word “epiphany” means to “manifest” or “show forth”. On this day the glory of the Lord was manifested to a world far beyond that manger where he had been laid as the Babe of Bethlehem. Now his glory was being revealed to the nations.

In this holy season we see the Child grow into adolescence and into adulthood. Luke writes he was strong, filled with wisdom and the favour of God was upon him”. (Luke 2:40) We see him leave his home in Nazareth and make his way to the edge of the River Jordan where John was preaching. We follow him in these coming weeks from his Baptism to his Transfiguration. We see him changing water into wine at a wedding in Cana of Galilee and feeding a hungry multitude in a grassy place. We hear him calling his first disciples and see how he begins to nurture them as a community. We encounter him as Teacher and Lord, and come to know the power of his love to heal and reconcile, to re-set our relations, one with another, in the wondrous grace of God.

This year we are “in Epiphany” until the very last day of February, almost two months to watch the gospel that is at the very heart of God made known in our Lord’s ministry. And if we listen carefully we will hear his invitation to show forth that same gospel in the manner of our living, particularly through the vows of our baptism.

This year our country celebrates the 150th Anniversary of Confederation… read the Primate’s full letter.