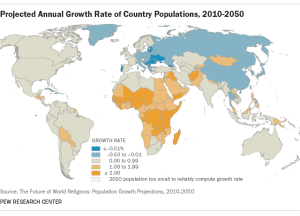 The religious profile of the world is rapidly changing, driven primarily by differences in fertility rates and the size of youth populations among the world’s major religions, as well as by people switching faiths. Over the next four decades, Christians will remain the largest religious group, but Islam will grow faster than any other major religion. If current trends continue, by 2050 …

These are among the global religious trends highlighted in new demographic projections by the Pew Research Center. The projections take into account the current size and geographic distribution of the world’s major religions, age differences, fertility and mortality rates, international migration and patterns in conversion.

Watch the video presentation from the Pew Research Center

Over the coming decades, Christians are expected to experience the largest net losses from switching. Globally, about 40 million people are projected to switch into Christianity, while 106 million are projected to leave, with most joining the ranks of the religiously unaffiliated.