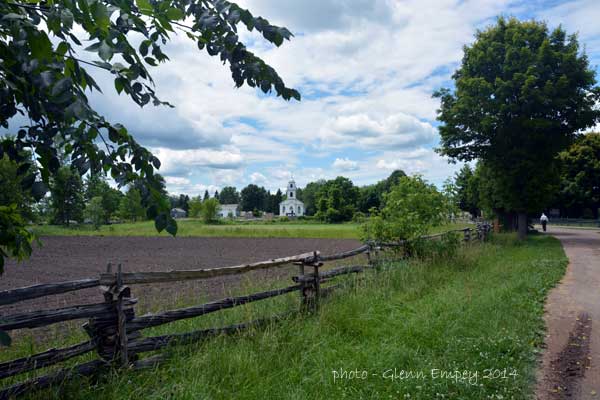 by The Rev’d Glenn Empey

Great public events have a certain kind of magnetism about them. Well, of course there is the entertainment and enjoyment factor but I wonder if there is more to wanting to be part of things if even on a widescreen TV from the comfort of a family room.

There is a certain kind of draw to being part of things.

Take a look back at the early days of rock and roll. Maybe you were actually part of the screaming frenzy of young girls who flocked to the Beatles. Or perhaps you have a daughter who was attracted to that experience. Young lads were more restrained but I’m sure they didn’t miss the young girls. And, if memories go back a little further, of course there was Elvis and some other forerunners.

Consider great sporting events. There is a kind of magic to actually being there. Right now, there are the Pan Am Games. Will a Canadian take gold? How many medals will Canada win?  For many, many people there’s some kind of magic to being part of it all at some level, in person or these days on TV. Apart from the sheer enjoyment and diversion, I wonder what else is part of the experience.

For a young girl watching Elvis or the Beatles, would one of the stars cast a look and a wink her way? Would they play something new or would they play a favourite song? I wonder if people were looking for something more.

Back at the Pan Ams, a young newcomer to track field is a sign of hope to reach record-breaking wins for Canada. There are signs and signs raise expectations. Such signs make you want to be part even more of what’s going on.

When you think of the Leafs, maybe fans are looking for a miracle? How about them Jays? Will they have their 5-2 lead still in the ninth? (In spite of my occasional comments, I am both a Leaf and Jays fan.)

I believe in miracles. There is always hope that there will be a sign of better things to come.

So, what would people be looking for when they kept following Jesus around in Galilee? Was there some kind of feeling of a festival? Was it like how thousands gathered in fields such as at Woodstock to hear songs of rebellion against authority? Against Viet Nam? Against the oppression of Blacks? Was that crowd also looking for something more?

And signs are the indication of all that is possible.

That’s what a miracle is. A miracle is a sign of hope.

Now, the people of Galilee, who were pressing upon Jesus as he travelled from place to place, were very practical in how they understood the signs. Their expectations and concerns were very concrete, grounded in the earthly challenges of everyday life.

“When the people saw the sign that he had done, they began to say, ‘This is indeed the prophet who is to come into the world.’ When Jesus realized that they were about to come and take him by force to make him king, he withdrew again to the mountain by himself.”

The crowd was thinking in only one dimension. Their interpretation was concrete because that was what had been predicted by the prophets: a new earthly king who would release them from oppression.

Surprisingly for them, Jesus withdraws to be alone. He takes off to a mountain to be alone. He escapes them without buying into the expectations of any kind of groupies.

“When evening came, his disciples went down to the sea, got into a boat, and started across the sea to Capernaum. It was now dark, and Jesus had not yet come to them. [So they were alone.]  The sea became rough because a strong wind was blowing. When they had rowed about three or four miles, they saw Jesus walking on the sea and coming near the boat, and they were terrified. But he said to them, ‘It is I; do not be afraid.’ ”

You and I look for signs, don’t we. We look to signs because they point the way to miracles. And, each of us, looks for miracles at one time or another. We may say to ourselves, “Just give me some kind of sign”.

A sign about overcoming illness. A sign that a son or daughter will get a good job or otherwise do better at something. A sign that the pain of loss will go away. A sign that a disease will be healed.

A sign in the midst of a dark storm that is frightening. Now that’s a different kind of sign.

And the response is different too than expected.

The disciples were terrified in the storm but Jesus calmly said, “It is I. Do not be afraid”.

More in the vernacular we’d say, such as to a frightened child when we came into a darkened room during a storm, “It’s just me”, with the implication that it’s OK; all will be well. “I’m here now. You will be OK.”

Was there a time like that for you when your mother or father, or loved one, came into a room and said those kinds of words and you felt better because you knew you were not alone?

The storm — or whatever was troubling — didn’t immediately go away but you knew you’d be alright. You knew for sure.

And the sign had shifted. It’s neither about fishes nor loaves. Nor is it about walking on water.

It is about who and what Jesus really is.

The sign shifts to a dimension of seeing things in a new way that transcends the limits of concrete concerns. It shifts from earthly to heavenly, from temporal to spiritual. It is a prevailing hope that helps quell worries.

What the gospel passage is all about today is simply that.

The deeper message and the unexpected sign is in Jesus’ words of reassurance: “It is I, do not be afraid”

“It’s me, you will be alright because I am with you always, no matter what. You will be OK.”