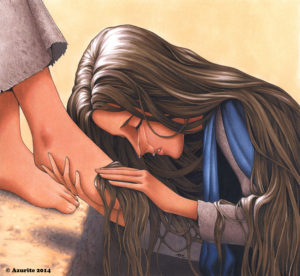 Once, a man decided to have a party. So he invited friends, family, colleagues and some others, as the story goes.  We don’t know exactly who the man was but his name was Simon – not the same Simon as in other versions of the story you might have heard. The man was of some social standing in the town. We don’t know why he is having the party but that doesn’t seem to matter. Any reason is a good reason for a party. Usually dinner parties and the like, with good company, are positive and fun experiences. Something to which to look forward … a pleasant time, good food, ample refreshments, and perhaps some entertainment of one sort or another.

To this party, it seems the man added another person to his guest list. Again, we don’t know why. Maybe it was because he had heard about that guest’s growing reputation among  the populace. Maybe the man was intrigued by the special guest’s new way of sharing wisdom. Maybe because he would be a curiosity. Maybe even an opportunity to have some fun by taunting the special guest.  Maybe he’s a prophet… maybe not. There are all kinds of reasons the man could have had for inviting this particular rabbi to his party. And it does appear that a certain rabbi was this special guest.

Now others also knew about this rabbi. Even those of low repute in the eyes of the self-justified. Like the woman in the story. What would possess such a person to crash a party? Presumably, the high and lofty were in attendance, people who were ‘somebody’s’, family, friends and so on of the man who had arranged the festivity.

There would be milling around, important conversations, maybe even some gossip in the corners. And then dinner at the table where likely the focal point would turn more to the man who had arranged the whole affair. No doubt he’d be watching the interactions of his guests and wondering about the special guest he had added to his list.

Into the midst of the occasion, now comes a certain woman, a woman who is out of place at such a gathering of elite.  She is not on the guest list. She is a gate-crasher. Not just any kind of gate-crasher but one who truly did not belong in such illustrious company. You see she was a sinner and everyone knew it. Interesting that the man didn’t have her thrown out. But that would have been a bit awkward since all her attention immediately fell to the man who was there as the special guest.

This version again is different than other versions you can read elsewhere in the story of the good news. This time there is no connection with Passover or any fate that lay ahead for the special guest. This time the party-crashing woman anoints the rabbi’s feet with oil while crying and wiping away her tears in what may seem a sensuous manner with her hair. Suddenly the focus is entirely on the woman and the special guest. He had been invited for whatever reason or ploy. She had been drawn somehow on her own to dare enter the party.

You may wonder if a silence would have befallen the revellers once they began to notice this woman and what was going on. No doubt there’d be some murmuring among the honourable guests.

Even the host murmured to himself, “If this man were a prophet, he would have known who and what kind of woman this is who is touching him—that she is a sinner.”

The rabbi, either reading the man’s body language or his mind, says, “Can I tell you something?”

“Yes, Teacher,” which is what rabbi means.

“Simon you’re missing the point. The love about which I am speaking is about humility, about being able to know ones own shortcomings, to be vulnerable and to be open.”

“Love is about being able to respond by knowing ones own need to be loved and to be accepted as the person you are. That has to do with forgiveness and being forgiven. It has to do with being forgivable. And once knowing that unconditional bond of acceptance and of being worthy no matter what ones journey has been, it is a new freedom to cut through barriers.

“It’s not about counting sins. It’s about forgiveness and the love that knowledge releases.

“Once you grasp that point, your outlook on life will be changed and you will understand about what it means to be freed into humility. That’s why the woman came to the banquet, Simon.

“Which leaves one other question for you, Simon: How is that you invited me as your special guest?”, the rabbi might ask.

One of the Pharisees asked Jesus to eat with him, and he went into the Pharisee’s house and took his place at the table. And a woman in the city, who was a sinner, having learned that he was eating in the Pharisee’s house, brought an alabaster jar of ointment. She stood behind him at his feet, weeping, and began to bathe his feet with her tears and to dry them with her hair. Then she continued kissing his feet and anointing them with the ointment. Now when the Pharisee who had invited him saw it, he said to himself, “If this man were a prophet, he would have known who and what kind of woman this is who is touching him—that she is a sinner.” Jesus spoke up and said to him, “Simon, I have something to say to you.” “Teacher,” he replied, “speak.” “A certain creditor had two debtors; one owed five hundred denarii, and the other fifty. When they could not pay, he canceled the debts for both of them. Now which of them will love him more?” Simon answered, “I suppose the one for whom he canceled the greater debt.” And Jesus said to him, “You have judged rightly.” Then turning toward the woman, he said to Simon, “Do you see this woman? I entered your house; you gave me no water for my feet, but she has bathed my feet with her tears and dried them with her hair. You gave me no kiss, but from the time I came in she has not stopped kissing my feet. You did not anoint my head with oil, but she has anointed my feet with ointment. Therefore, I tell you, her sins, which were many, have been forgiven; hence she has shown great love. But the one to whom little is forgiven, loves little.” Then he said to her, “Your sins are forgiven.” But those who were at the table with him began to say among themselves, “Who is this who even forgives sins?” And he said to the woman, “Your faith has saved you; go in peace.”

Soon afterwards he went on through cities and villages, proclaiming and bringing the good news of the kingdom of God. The twelve were with him, as well as some women who had been cured of evil spirits and infirmities: Mary, called Magdalene, from whom seven demons had gone out, and Joanna, the wife of Herod’s steward Chuza, and Susanna, and many others, who provided for them out of their resources.