Reflections by The Rev’d W. Glenn Empey, Copyright © 2014 by the author 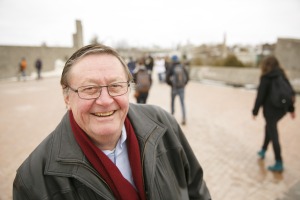 Anytime that something comes on the TV about religion or the Church, I’ve been noticing my twenty-something son has a consistent comment. For a recent one, I don’t know if it was prompted by some general remark that I’d made or if was the content of the TV item.

How I respond to that is by saying that a church is a microcosm of society. It’s really no different than any other human organization or institution. There is always a human dynamic in the inter-actions of people who are mere humans. It’s the same in every human endeavour. Think about it. It’s the same in work situations, clubs, municipal councils, governments. The degree of its visibility will vary. Sometimes there is a lot of effort to hide it in the fog of things; nonetheless, it’s always there, it would seem to me.

Here’s another influence: I am really getting irritated by how the media portrays religion in general in most of its coverage, especially the television media. Not that we don’t already have enough problems in the world with people not getting along with one another–we have a media that simplifies the dynamics as all being solely the result of religion. That’s just a massively gross over-simplification that is incredibly misleading for those who cannot see anything beyond the snippets of sound bytes.

Since the earliest of times, powers-who-be have always tried to use a religious angle to sway the people toward their own particular interpretation of things. The Emperor, Constantine, used Christianity cunningly as a way of uniting his huge empire. Elizabeth I used the Book of Common Prayer and the Act of Uniformity literally to keep her head and to unite her empire. (The Act of Uniformity actually appears in the BCP if you’d like to check it out sometime.) Some of that may not have been all bad contrary to what seems to be the general categorization of world religion in these days.

In that case, on the news and in the media each and every day, the bottom-line, unsettling and twisting conundrum is fundamentalism… not religion in itself. Again, think about it: what world faith group does not espouse peace as a basic tenet of its creed. Look how Muslim organizations are now speaking out against the non-Islamic acts of evil perpetrated by ISIS and more recently, by misguided, mentally unstable young people who have become radicalized by the drug of idealism injected by an incredibly twisted kind of cultural fundamentalism.

We can see in history how so often one great power wields its might to dominate another power. Think about all the manoeuvering, intrigue and clandestine activities that went on especially during the Cold War to mislead those considered to be the enemy. Look at how the CIA engaged in the politics of Latin America to incite a revolution among its people thereby destabilizing the government and its institutions. And one can really wonder if the motivation about that was not all about bananas. I’m not kidding. Check it out. Oil would be the other world elixir and stimulant for mistreating others on a huge scale. Minerals can do the same.

When you turn your focus to how humans respond to other humans on that high level scale, I wonder why it was that it was not until certain western people were infected with Ebola that those nations started to take the problems of their less fortunate sisters and brother in western Africa into serious consideration.

Human dynamics are often flawed by self-interests of one degree or another. That’s in the macrocosm where it is much more difficult actually to recognize what’s really going on. And, there are more risks there too to speak out and to name the reality of the behaviour.

A church is a microcosm of all that. It is by nature smaller. Some much smaller than others. So things are more evident. In some ways, they’re more squeezed into a tighter focus. Certainly, they’re much more directly visible. Sometimes.

More than thirty years ago, when I was the rector of a medium-sized parish in [another diocese], I remember watching a television programme around Easter time. I can’t be sure of the name of the movie. It was excellent. It was what I thought was an extremely accurate portrayal of the inter-personal dynamics of the disciples and the reality of what Jesus was preaching. It was not a glorified, namby-pamby Pollyanna portrayal. It showed the real struggles, disagreements, vying for attention and all those kinds of very human characteristics. I would love to see it again. I have never seen it since. I’m not sure of the title, unfortunately. And it’s not likely it’s going to return in these days to our often self-serving media.

Do you really think that the disciples were a merry band of men (and women) who tip-toed delightedly all over Galilee in some kind of vacuum sealed off from the realities of the human condition? Do you not think they each had their own motivations, desires, foibles as did – and does – any human being?

The Gospels focus on re-telling the key messages of Jesus teaching. That was their purpose more so than giving an actual blow-by-blow account of how that all played out in the real lives of the disciples and in the real inter-actions of their individual relationships with one another. So, you have to look beyond the text with the insight of knowing what it means to be a human being… and that would be thanks to our own human experience.

So, there’s my “Rex Murphy” high level commentary. And what does that have to do with anything?

Well, a parish is indeed a very human kind of entity. We can always endeavour to do things better, to see things more clearly, and to understand things more clearly. For that, it seems to me, it is not just a sugar-coating of words such as love, exhortation, forgiveness, compassion and so on. It is persisting in putting those qualities into action that unpacks the reality of what it means to be humans in community with one another. It is a continuing process and a call to seek the Light from the shadows.

It means hanging in. It means listening. It means speaking up kindly. It means much more than the pontification of words; it means doing the very hard toil of putting the teachings into action in a broken and flawed world. It’s broken and flawed by definition since we each only have the reality of being mere flesh and blood. And that’s the crucible of the gospel message. The message is not for some Camelot magical kingdom where knights sit poised at a round-table. The message is for the actual real world here and now.

Teachings are only academic kinds of concepts unless they’re grounded in the nitty-grittty of the flesh, blood and guts of the real world. And that’s what the message is all about. That’s how very real disciples actually walked with Jesus in Galilee. And, that’s how we, as mere creatures in a fallen world, also walk together with Jesus in these days.